My husband and I are a perfect match.  He is outgoing and can talk to anyone.  Me, on the other hand…  I’m shy and really hate small talk.  I’m that awkward person at the party who will smile and answer your questions all day long, but it’s hard for me to strike up a conversation.  I’d much rather be talking to puppies.

So, when Bruna arrived, I was fine so long as Dane was around.  Like I said, he can talk to anyone.  Plus, he’s easy to talk to.  Random people spill their problems to him just because he said, “Hi” and smiled at them.  But when Bruna and I were alone…  Well, it was a bit uncomfortable at first, especially since Bruna didn’t talk much either.

Finding a way to connect

Because of this, Dane tried to find ways for us to connect.  Bruna did aerial silks in Brazil and loved it.  My researching hubby got online and surprisingly, found an aerial yoga class about 15 minutes from our loft.  We asked Bruna if she’d like to take a class and she excitedly answered, “Yes!”  I told her I’d be happy to drive her and watch.  To this, she responded, “No!  You have to take the class with me!”

Now, to be quite honest, taking an aerial yoga class didn’t sound all that fun.  I was in my late thirties and had never had much upper body strength.  I knew my abs were weak, and I really don’t like it when I’m not good at something.  But Bruna was away from her entire family doing an exchange program and had agreed to live with people she didn’t even know.  She was way out of her comfort zone.  So, I figured the least I could do was go to an aerial yoga class with her.

We signed up and a few days later, we were off to class.  I’m not sure if you know much about aerials, but the quickest way to describe silks is to tell you that it’s what the monkey in “Night at the Museum” did.  Ha!  That’s what Bruna did in Brazil anyway.

But we took an aerial yoga class, which isn’t really yoga at all.  The silk is hung to create a “hammock” of sorts.  And you do all kinds of fitness moves and eventually dance moves in the silks.  Sounds fun, right?  Well, it is.  But it’s also super hard!  And at first, there is absolutely nothing silky about it.  You end up with a little silk burn and small bruises (if you are like me and bruise easily) and you find muscles that you never knew you had.

But here we were ….  I don’t remember everything we did that first class, but I do remember that at some point, we were supposed to do a pull up and flip over into an inverted tuck.  Kelly, our instructor, made it look super simple and Bruna had no problem with the move.  She was flawless.  So, here I go.  Pull up, tuck my legs, try to lean back, and whoa!  What is going on?!  My feet went flopping down and I felt like an ungraceful idiot, to be quite honest.

After class, I asked Bruna if she liked it.  She did and asked me what I thought.  I said it was hard, but fun.  I asked if she wanted to keep going.  She didn’t answer immediately, so I told her that I’d really like to try it again.  She started smiling and said, “Me too!”

So, aerial yoga became our thing.  We went once a week together until Bruna started taking dance classes.  Then, she took her class and I took yoga immediately after.  And every week, I tried to get into that inverted tuck.  And every week, my feet flopped to the floor.  Until….

I caught a toe on the silks and got myself into an inverted tuck!  What?!  I’m awesome!  Well, not really.  It wasn’t all that graceful and certainly didn’t look like how Kelly or Bruna got into their inverted tucks, but I did it.  And I was proud of myself. ?

After Bruna left, I kept going to aerial yoga.  Silent tears trickled down my cheeks the first time I went without her because I missed her so much.  After a bit, life got in the way and I stopped attending class for about 6 months.  I wish I hadn’t, but regrets are futile.

I’ve started going again.  The studio, MAYA Movement Arts, has grown and now there are aerial yoga, aerial fitness, and aerial dance classes.  It is my goal to be in one of the aerial dance recitals like Bruna.  (I’ll have to talk about her performance in another blog.)  But I just wasn’t sure I was ready for dance, yet.  Kelly encouraged me to give it a try and so, I’ve been attending aerial dance classes for about a month now.  Last week, she critiqued my tuck a little and told me not to lean back but to pull up and flip over.  So, I’m trying.

I went to a fitness class this week and the teacher filmed me doing my pullover.  I’ll warn you.  It’s ugly.  For real.  Messy, not pretty, needs work.  I lean back too quickly, lead with one leg, straighten my arms way too soon, and there is a great shot of my pudgy belly at the beginning (as I psyche myself into doing my pullover) and my entire booty at the end.  (But if you want to see the video, click here.)

All of this to say…

I suppose I’ve told you all of this to say…

Get out of your comfort zone.  You will miss out on so much in life if you only do what you’ve always done.

Keep trying.  Things aren’t always easy or graceful.  And you don’t always get it on the first try.  But that doesn’t mean you shouldn’t do it!

Life is messy.  Sometimes we feel like we are scrambling with arms and legs flopping, but we just have to keep working at it. 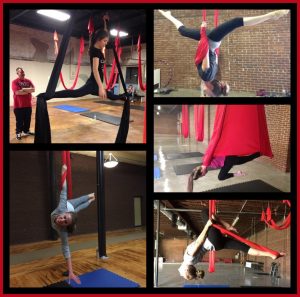 If anything I wrote resonates with you, please tell us about it in the comments!

On Being Childless: Love & Possibilities…

On Living MY Best Life: The Thoughts of...

I’m so proud of your success with serial yoga, and the fact that you did it with Bruna makes it even sweeter. Your husband is a smart man. ?